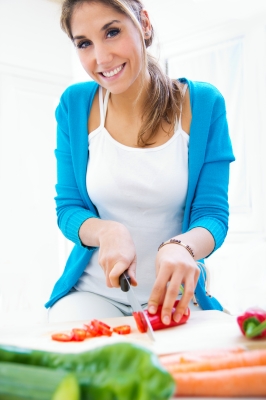 It’s no surprise that a healthy body has a better chance of achieving a health pregnancy and live birth. Those things go hand-in-hand. However, in an era when obesity is on the rise, healthy bodies are harder and harder to come by.

We’ve known for a while now that obesity and infertility rates are linked. In fact, the American Society of Reproductive Medicine (ASRM) states that evidence-based research finds that, “…obesity counts for 6% of primary infertility,” and that, “…More than 70% of women who are infertile as the result of body weight disorders will conceive spontaneously if their weight disorder is corrected through a weight-gaining or weight-reduction diet as appropriate.”

That’s a startling statistic. However, here’s an even more startling statistic pertaining to obesity and fertility: babies born to obese women have a significantly higher risk of infant mortality than those born to women with a body mass index (BMI) that is normal or even slightly high.

There Is a Link Between Infant Mortality and Body Mass Index

When a patient is obese, it puts the doctor in an uncomfortable position. Of course, the doctor’s first priority is to promote patient health and well-being, but body weight is laden with emotionally complex layers. When a fertility specialist is serving clients who are overweight or obese, the weight conversation has to be on the table because of the clear links between obesity and infertility. Plus, for women, weight can also be a symptom that something else is going on – like PCOS or thyroid issues – both of which can also affect fertility rates.

Now, OB/GYNs, fertility specialists and midwives have another reason to get compassionately serious with patients regarding their body weight – the baby’s well-being.

An article published in the February 2016 issue of Obstetrics & Gynecology, titled, “Prepregnancy Body Mass Index and Infant Mortality in 38 U.S. States, 2012–2013,” demonstrates a shocking correlation between obese mothers and increased infant mortality rates. The study was led by researchers at the Boston University School of Public Health.

Researchers found that while obesity increased the number of infant deaths from congenital abnormalities as well as sudden and unexpected infant death, the most dramatic relationship existed between obese women and babies who died from preterm-related causes, with some of the rates being as much as twice as high.

Pre-Pregnancy Weight Must Be Part of the Conversation for Primary Clinicians, OBs & Midwives

Lead researcher Eugene Declercq, professor of community health sciences at BUSPH, says, “The findings suggest that primary care clinicians, OB-GYNs and midwives need to have conversations about weight as part of well-woman care and when women are contemplating getting pregnant.” He continued, “There is a need for more open, honest discussions about avoiding the possible risks of maternal obesity on infant health.”

It’s not easy to lose weight. It requires an entire shift in your perspective, lifestyle and day-to-day decision-making processes. In cases where food addiction or compulsive behavior are the cause, a therapist may also be a tremendous help.

Let your developing baby be your inspiration. Find healthcare professionals who specialize in weight management, holistic well-being and nutrition to give yourself – and your baby – a new lease on life.

Image courtesy of nenetus at FreeDigitalPhotos.net